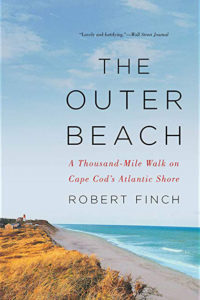 Come meet Cape Cod nature author, essayist and radio commentator, Robert Finch who will be signing copies of his books, including his latest book released this summer, The Outer Beach: A Thousand-Mile Walk on Cape Cod’s Atlantic Shore, apoignant, candid chronicle of a beloved nature writer’s fifty-year relationship with an iconic American landscape.

Those who have encountered Cape Cod – or merely dipped into an account of its rich history – know that it is a singular place. Robert Finch writes of its beaches: “No other place I know sears the heart with such a constant juxtaposition of pleasure and pain, of beauty being born and destroyed in the same moment.” And nowhere within its borders is this truth more vivid and dramatic than along the forty miles of Atlantic coast – what Finch has always known as “The Outer Beach.” The essays here represent over fifty years and a cumulative thousand miles of walking along the storied edge of the Cape’s epochal arm.

Finch considers evidence of nature’s fury: shipwrecks, beached whales, towering natural edifices, ferocious seaside blizzards. And he ponders everyday human interactions conducted in its environment with equal curiosity, wit, and insight: taking a weeks-old puppy for his first beach walk, engaging in a nocturnal dance with one of the Cape’s storied lighthouses, stumbling, unexpectedly, upon nude sunbathers, or even encountering out-of-towners hoping an Uber will fetch them from the other side of a remote dune field.

Throughout these essays, Finch pays tribute to the Outer Beach’s impressive literary legacy, meditates on its often tragic history, and explores the strange, mutable nature of time near the ocean. But lurking behind every experience and observation—both pivotal and quotidian—is the essential question that the beach beckons every one of its pilgrims to confront: how do we accept our brief existence here, caught between overwhelming beauty and merciless indifference?

Finch’s affable voice, attentive eye, and stirring prose will be cherished by the Cape’s staunch lifers and erstwhile visitors alike, and strike a resounding chord with anyone else who has been left breathless by the majestic, unrelenting beauty of the shore.

One of America’s leading nature writers, Robert Finch has lived on Cape Cod since 1971. He has published eight books of essays and is co-editor of The Norton Book of Nature Writing. His weekly radio commentary, A Cape Cod Notebook, has been broadcast since 2005 on WCAI, the Woods Hole NPR affiliate of WGBH, and for which he twice received the prestigious Edward R. Murrow Award for Radio Writing. His essays have appeared in numerous magazines and journals and his books have been translated into Japanese and Chinese. He was named as one of the New England Literary Lights by the Associates of the Boston Public Library, and has received the Non-Fiction Award from the New England Booksellers Association.

The reception will feature an exhibition of wet paintings completed that morning along with plein air and studio works by master artists. The public is invited to attend for this casual gathering of artists, neighbors and friends.

Addison Art Gallery
Designated Cape Cod’s Best Gallery by Cape Cod Magazine, the internationally respected Addison Art Gallery is widely known for representing the region’s most popular artists, bringing exceptional emerging artists to the market, offering collectors a plethora of opportunities to get to know artists, and generously supporting numerous community, charitable and environmental organizations. This fine art gallery represents artists from across the United States, Mexico and France, and is home to many of the most sought-after Cape Cod artists. Housed in a charming Cape house overlooking Orleans Town Cove, the welcoming gallery provides a comfortable environment for viewing art worth collecting.

The Addison Art Gallery, often praised for its ingenious exhibitions and events, has collaborated with the Cape Cod Museum of Art, Provincetown Art Association & Museum, Truro, Wellfleet and Eastham libraries, Cape Cod Hospital, Truro Historical Society, Orleans Conservation Commission, Orleans Improvement Association, Orleans Pond Coalition, and Henry Beston Society. The gallery was also chosen as the Cape Cod National Seashore’s dedicated art partner for the 50th anniversary of the Seashore as well as the 100th anniversary of the National Park Service; created After Hopper, an ongoing venture celebrating contemporary artists inspired by Edward Hopper and the places he painted; is presenting Outermost Inspirations, an homage to Henry Beston’s The Outermost House this year; and will orchestrate In Thoreau’s Views, an artful look at Henry David Thoreau’s Cape Cod in 2019.