Just Say “No” to Plastic Straws

On the second night of the April 2018 town meeting, Provincetown unanimously voted to approve an article banning the use of plastic straws by June of 2019 (along with one prohibiting polystyrene.)  This came from a carefully researched campaign, inspired by Center for Coastal 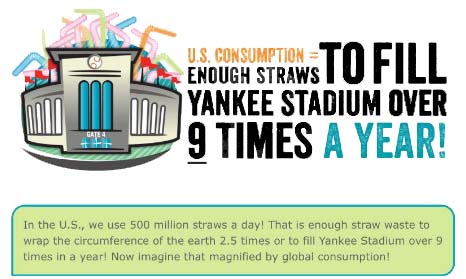 Studies’ ocean plastics work confirming straws and stirrers to be one of the top items found in marine plastic wastes.  CCS joined people across the globe documenting the damage and overwhelming waste of this quintessential “single use plastic” – a straw is used for about 20 minutes and lasts a couple hundred years.

Far more straws are given out each day than plastic bags (incidentally, Provincetown was the first town on Cape to ban plastic bags — only three towns on the Cape have not banned plastic bags – Orleans, Brewster and Eastham.)  Plastic straws are given away without asking in most coffee shops, restaurants, ice cream shops and a host of tourist attractions.  They are easily lifted by wind and dumped into marine waters, tempting sea creatures for a century or two.  Across our nation and, interestingly, even across the Atlantic Ocean in England and Scotland, and across the Pacific in Australia and Taiwan, the “just say no” to plastic straws movement has exploded.

According to one of the US anti-straw organizations, every day in the US, we use 500 million plastic straws, enough to wrap around the earth’s equator 2.5 times, enough to fill Yankee Stadium nine times each year. What’s wrong with us? Have we all become incapable of drinking out of a cup?

Beginning with elementary school students in Falmouth and their “Skip the Straw” campaign, morphing towards middle schoolers on Martha’s Vineyard in 2014 (Straw-Free MV), the perils of plastic straws have begun to capture attention on Cape.  These young students have proven how what seems a small thing, in the aggregate, can move mountains.

And they are not alone.

As early as 2016, the Ocean Conservancy asked for 25,000 volunteers to agree to give up straws completely before the next Ocean Cleanup Day in September, the number estimated to keep 5 million plastic straws out of the ocean and landfills, “preventing marine debris one straw at the time.”

So Provincetown’s action validates a groundswell of concern across the globe.  Plastic straws and stirrers are consistently among the top ten items in coastal cleanups. They may be tiny, but that makes straws all the more dangerous to marine life.

The Falmouth effort had kids ask Falmouth businesses to help save their marine world by stating clearly on menus and by counters “straws available on request,” instead of giving them out.  The Provincetown campaign included a video where the owner of Mac’s Seafood explained how his experiment in no plastic straws, asking patrons to ask if they need a paper straw, has actually saved the restaurant money, confirming straws are a habit not a need for most people.

So as you make your way around our towns this summer, think of the power of “No.” Show that you can sip a drink from a cup like a grownup.  Tell businesses, especially those on beaches and the waterfront, why plastic straws are bad.  Ask for paper straws if you need one.  Buy reusable metal or bamboo straws. And ask for wooden stirrers for hot drinks. Our waters and the creatures that live there will thank you.

Here is a link to a company that only sells sustainable products.