Pilgrim Lake is the largest of Orleans’ freshwater ponds at 43 acres and 34 feet to bottom at its deepest point. Since it is over ten acres, it is a Great Pond owned by the Commonwealth of Massachusetts. Pilgrim has a V-shape (heart shape) with a small island. It is accessible from the end of Herring Brook Way.

There is a town landing including a large swimming beach and restroom facilities, with parking for ~20 cars, at the end of Herring Brook Road. Pilgrim requires a town sticker during the season.

The public beach is used for swimming lessons for all ages during July and August. It has shade trees as well as a full sun beach with picnic tables and restroom facilities. The shallow waters allow easy access for children and elders with mobility issues, with a ramp into the water.

Paddleboarding and kayaking are popular at Pilgrim, with equipment easy to carry to the water from the parking lot, despite the absence of a boat landing. During truly cold winters, ice fishing and skating attract residents. Pilgrim Lake has long been a four-season fishing pond (and back in the day, the presence of ice fishing meant it would be safe to skate.) “Old-timers” recall “two week fishing derbies” twice a year and it was a known duck hunting refuge, with a “blind” on the island long ago.

The herring also use Pilgrim Lake during the summer arriving through the Lonnie’s Pond estuary in the spring. Pilgrim is the only viable herring pond left in Orleans.

Pilgrim Lake is currently being tested by divers and water scientists under contract to the town to understand some of the impairments to its ecosystem, with excess nutrients coming in from the 176-acre watershed, which extends from Monument Road east to Pleasant Bay and south along Route 28 to Arey’s Pond and east along Arey’s Lane. Contributing to the internal phosphorus is a mixture of seasonal and year-round homes which leach nutrients into Pilgrim through their septic systems. The town has put Pilgrim as a priority pond for a management plan.

Pilgrim Lake has been the site for at least two recent Kettle Pond Fishing Tournaments, with a humorous article published on the 2015 contest in Cape Cod Wave magazine.

Much loved Pilgrim is the largest of Orleans’ freshwater ponds at 43 acres and 34 feet to bottom at its deepest point. Its V or almost heart shape is punctuated by a small island.

Long time residents tell fascinating stories of the old days at Pilgrim. Scott Johnson, whose family has owned a 1780’s half cape on Monument St. for 70 years, describes his summer days on the lake. In the 40’s, Scott remembers, one could see across the lake to the ocean from his home here. As a child, he was awakened by the dawn bugle sounding at Namequoit Sailing Camp across the lake, and ended his day hearing the Camp taps. Swimming lessons have been given on the town landing for many years, and in earlier days, the students were accompanied by Oscar, the very large snapping turtle who lived, bedecked with fishing lures, under the dock. In fact, In keeping with the thinking of that time, Pam Herrick remembers her 1940’s self washing her hair in the lake after a salt water swim and hoping the boys wouldn’t see her!

In Scott’s youth, the lake had multiple season human uses. There were two week ice fishing derbies which even off-Capers flocked to, catching pickerel, small mouthed bass and perch. When ice fishermen were out there, others knew it was safe to skate. Scott also remembers the dramatic day in 1967 when a float plane owned by Frank Joy clipped a wing on takeoff and fell upside down in the water. Everyone lived to tell the tale. Scott’s parents and grandparents liked to farm and, as early environmentalists, used only sawdust to fertilize the hundreds of blueberry bushes they planted adjacent to the lake; these form a good shorefront vegetated buffer today. 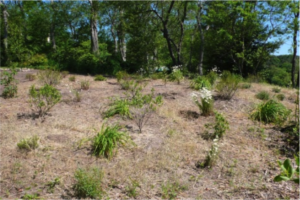 Liz DeLima, whose teacher parents could afford to purchase pond front property in the 1950’s because it could be had for $1500 an acre, remembers that her mom, a scientist, loved the idea that Pilgrim Lake was connected to Lonnie’s Pond (a salt pond) by a herring run. She reasoned that the Norsemen, reputed to be herring fishermen, knew that herring spawn in freshwater, and so may have followed the herring run from salt water to the lake, in order to have freshwater for their next journey. She also recalled that the town landing was used in the winter by duck hunters, and the island had a duck blind in earlier years.

Scott, who has been the herring warden at Pilgrim Lake for 35 years, knows there are harbor seals in Lonnie’s Pond, waiting for the herring to move through to the lake. These protected seals share herring with foxes, gulls, ospreys and an otter! And certainly any remaining snappers like herring as well. As warden, he has regulated the water level in the lake to help the spawning herring enter the lake in spring and leave it in the fall, their job done. 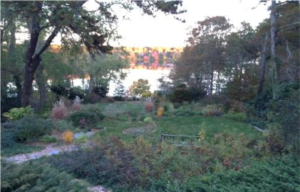 When long time residents were asked recently what changes they have observed, they mentioned that although swimming lessons are still given there, the dock has disintegrated, and Oscar hasn’t been seen in a long time. The ice skating and ice fishing rarely occur now as there are fewer weeks of ice. Camp Namequoit is gone. Water clarity has declined.

The 2007 pond study done for Orleans by the Cape Cod Commission confirmed the lake faces problems with excess nutrients. Commission staff reported then that the average phosphorus level in the lake exceeded the healthy level of 10 parts per billion (ppb) by almost 50%, or 14.6 ppb at one meter down. Of that, about half came from septic systems and half from release of old phosphorus from the sediments. Further, the report predicted that Pilgrim Lake had the potential to slip in a few decades from the rating of “somewhat impacted” by nutrients to “heavily impacted” by nutrients.

Could careful maintenance and upgrading of septic systems, reduction in fertilizer use, creation of vegetated shoreline buffer plantings, and correction of storm water runoff help the lake?

Two abutters with great respect for the lake, gardener and environmentalist Beth Minear and her husband Larry, created a shoreline vegetated buffer of native plants at their lakeside home, where a steep bank had been invaded by exotic plants. These native plants hold the soil, absorb nutrients running toward the lake, and, being part of the local ecosystem, need less water than many non native plants. After Beth received the enthusiastic permission of the Conservation Commission, it took about 5 years to go from the tiny plants you see in the early photo to reach the beauty you see in the current photo. Joining the existing wonderfully scented summersweet, there are elegant oak leaf hydrangea, both black fruited and red fruited hollies, beach plum, high and low bush blueberries, groundcover bearberry and sweet fern, not a fern at all. Joining these shrubs are native grasses such as little blue stem and the wonderful rosy flowered Joe Pye weed, named after an Indian medicine man.

It’s time to find out what we can do for our ponds. Follow the Orleans Pond Coalition, or better yet join us, in our work to gather more information about the condition of each of our ponds and learn more about what each of us can do to help improve their health.